UNBITI will have a booth setup at JEDI's Indigenous Trades Expo June 9/22 at Grant Harvey Centre 9am-4pm. See you there!

at 1:30pm. By Invitation only. RSVP to Starla Contact by Email 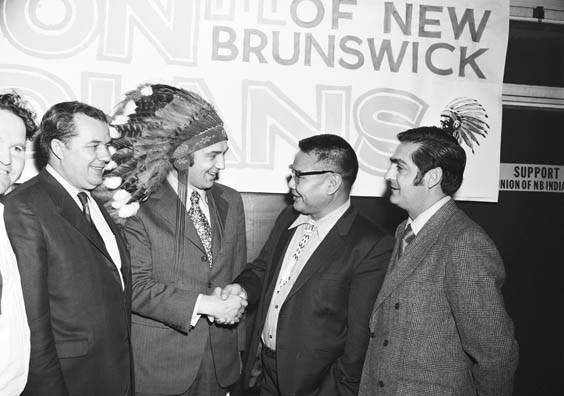 We, the members of the Union of New Brunswick Indians are Mi’kmaq and Maliseet Peoples

We have a special relationship with the Creator and with our Traditional lands including their animate and inanimate beings such as the soil, air, waters, plants, animals and natural resources;

The Creator gave us the responsibility to care for our Traditional Lands and protect them so that they can continue to provide for generations  yet to come;

The Province of New Brunswick lies within our Traditional Lands which themselves are part of Wolaseoqiyik and Mi’kmaki;

The Mi’kmaq and Maliseet Peoples are Aboriginal Peoples of Canada who helped to develop and build this Country;

We have Aboriginal Rights, Aboriginal Title and Treaty Rights within our Traditional Lands which we have never ceded-or surrendered;

We entered into nation-to-nation Treaty relationships with the Crown based on peace, friendship and mutual respect which confirm our Rights, including our rights of self-government, our rights to manage our lands and resources, our rights of commercial and economic development and our rights of trade to achieve individual; community and national self sufficiency

Our Rights are inalienable, are guaranteed by the Constitution of Canada and are recognized and protected under national and international law;

The Supreme Court of Canada has directed that Aboriginal People and the Crown are to negotiate modern understandings, interpretations and applications of Aboriginal and Treaty Rights and Aboriginal Title;

The Supreme Court of Canada has imposed on the Crown the ongoing constitutional obligation to consult with and accommodate the rights and interests of the Aboriginal Peoples of Canada;

Both the federal and provincial governments have knowledge of our Aboriginal Title, Treaties and Aboriginal Rights but continue to make and implement decisions which do or can be reasonably expected to impact negatively on our Rights, Tittles and Interests;

Both the federal and provincial governments do so without consulting with us and without accommodating our Rights, Tittles and Interests;

The Supreme Court of Canada has said that government can no longer be permitted to run roughshod over Aboriginal Rights Titles and Interests.

We therefore proclaim that 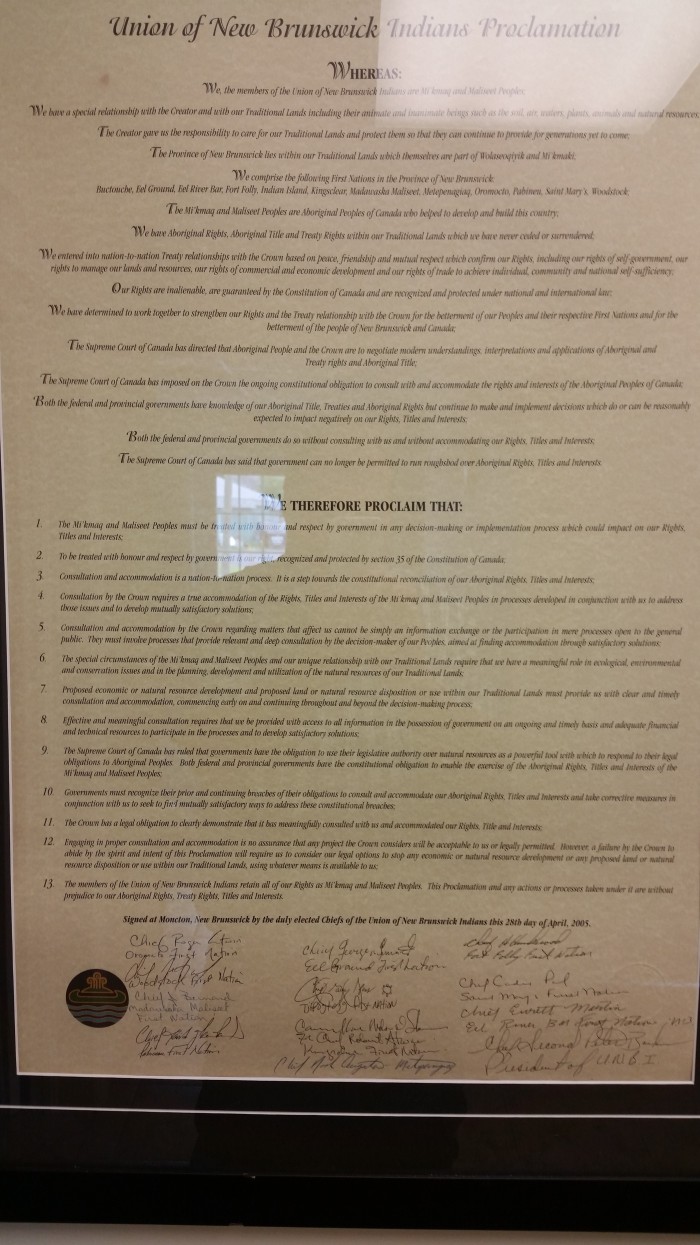 "First there was land, and water and game. Indians lived on this land, then саme the white man."

1. BE IT RESOLVED THAT, the name of this organization will be the "UNION OF NEW BRUNSWICK INDIANS INCORPORATED".

2. BE IT RESOLVED THAT, this organization have for objectives: "To foster and promote greater self-determination

of the Indian people of New Brunswick in the presence of all of their aboriginal, treaty and residual rights."

3. BE IT RESOLVED THAT, all those other Articles contained in the adopted By-Laws will be adhered to.

l. To safeguard the aboriginal, treaty and residual rights of the Indians of New Brunswick.

2. To protect the Indians of New Brunswick collectively from injustices arising directly or indirectly from the interpretation of the Indian Act, and the aboriginal, treaty and residual rights, and civil or criminal court action.

3. To foster and promote human development, social development and economic development of Indian people and their reserve lands in New Brunswick.

* HUMAN DEVELOPMENT - assume effective responsibility for the education, training, retraining and upgrading of the Indian people of New Brunswick.

for the betterment of the social and physical life of the Indian people of New Brunswick; areas of activity to include among others:

* ECONOMIC DEVELOPMENT - assume effective responsibility for the optimum economic development of Reserve lands thus creating employment opportunities for the Indian people and/or revenues for their Bands. -

4. Actively support and work closely with other Indian organizations.

5. Maintain contact and co-operate with Federal , Provincial and Municipal Governments, and other non-Indian organization matters pertaining directly or indirectly to the interest of New Brunswick Indians, but not necessarily accepting policies, programs and conditions that jeopardize the rights of Indians of New Brunswick.

1. A person who is an "Indian" and whose name is on the "Band List" or "General List" (as defined in the Indian Act, RSC 1970, c. 1-6) in New Brunswick is eligible for General Membership in the Union.

2. Other persons, both Indian and non-Indian, may be invited to become honorary members, subject to the approval of the Board of Directors.

ARTICLE III: THE BOARD OF DIRECTORS

1. The Board of Directors shall consist of:

a) The Chiefs of ‘New Brunswick's Micmac and Maliseet Reserves.

b) The Chief can delegate a Band member to represent

him or her in his or her absence by written authorization signed by the Chief.

2. The Board of Directors shall appoint its own Chairperson.

4. There must be at least a majority of the Board of Director in attendance at a meeting to constitute a quorum.

5. The Board of Directors shall be paid an honorarium of $50.00 per day plus travelling and cost of living expenses while attending the monthly meetings.

6. The term of office of a Board of Director will be as long as that individual remains in office as Chief.

a) The Chiefs of all the Reserves in New Brunswick as duly elected representatives of their respective Bands, will be the Board of Directors of the Union.

b) The Board of Directors are to meet monthly to review the affairs of the Union with the Chair person.

a) Officers of the Union may be hired and dismissed by the Board of Directors, to administer and manage the operations of the Union.

b) Officers will be employed on a contract for their services rendered and paid a salary commensurate with their qualifications.

c) The following officers will immediately be designated to carry out their present and future functions, namely:

d) The duties and responsibilities of each and every officer are to be determined by the Board of Directors who can change, vary and/or alter either or both functions.

e) The officers are answerable to the Board of Directors to carry out their duties and responsibilities.

1. An Annual General Meeting shall be held each year on a date determined by the Board of Directors. .

2. A Special General Meeting may be called by the Board as it considers necessary.

3. Notice of all General Meetings shall be announced by the Board at least 20 days prior, unless, there is a need for an emergency meeting, and communicated to the members by:

a) A written notification by registered mail sent to the Board of Directors.

b) Written notification (5 copies) mailed to all Band Managers to be posted on notice boards în such public areas as a community hall, church, etc.

c) The notice published in one or more newspapers read by the majority of the members.

1. Disbursement of funds shall be made by cheque under the Financial Officer's signature co-signed by the appropriate Program Officer.

2. Recording and authorizations of disbursements of funds shall be done according to the management information and accounting system prepared for the Union by a Union Financial Officer who is a Chartered Accountant.

4. In accordance with section 95 of the Companies Act, every director of the Union, his heirs, executors, estate and effects, respectively, from time to time and at all times, be indemnified and saved harmless out of the funds of the Union, from and against all costs, charges and expenses sustained or incurred by him, in or about any action, suit or proceeding which is brought, commenced or prosecuted against him for or in respect of any act, deed, matter or thing, made, done or permitted by him in or about the execution of the duties of his office; and also from and against "all other costs, charges and expenses which he sustains or incurs in or about or in relation to the affairs thereof, except such costs, charges or expense: as are occasioned by his own willful neglect or default.

The articles contained herein may be amended by at least two-thirds majority of the Board of Directors and presented for majority approval at the Annual General Meeting.

The Union will be a non-profit and charitable organization.

Upon dissolution of this organization, any remaining funds will be made available to an Indian organization approved by the Board of Directors.